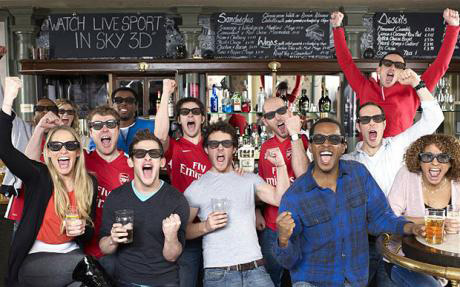 By the time I arrived in our local at 8.30 on Saturday, our resident DJ, Disco Dave Double-Decks, had already whipped the crowd into a frenzy with such England Classics “World in Motion”and “Its Coming Home” but the roof was well and truly raised when pub football team blessed us with a Karaoke Rendition of the immortal Fat Les classic ” Vindaloo”. Pure Magic.

At 9.30, supper was served. Shield Shaped Pizzas with the red of Italian tomato paste dominated by the broad white cross of melted Lancashire Cheese. Peroni was on sale at £12 per bottle to discourage anyone foolish enough to consider consuming anything other than English Strongbow Cider or John Smiths Bitter.

The sweepstakes followed, scores, scorers, time of first goal, time of Rooney’s sending off…….and at 10.45 the teams emerged. The Pub rose, as one and screeched most of the words of the National Anthem, some even in the correct order, whilst a couple of curmudgeonly Scots cowered in the corner. At eleven o clock, it all kicked off………literally. England surpassed expectations. The world all expected them to get beat but few expected them to actually play something that resembled attacking football.

And so, with a defeat under our belts, we have just entered the knock out stages slightly earlier than we would have liked but we still believe. I certainly believe that there is every reason to be back down the local at 8pm on Thursday.