Young’s is to pull out of brewing after selling its 40% shareholding in Wells & Young’s Brewing Company to Charles Wells for £15.1m.

Wells & Young’s was formed in 2006 following the merger of both company’s brewing operations, with Charles Wells holding a majority 60% stake. 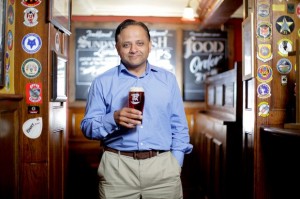 Rooney Anand has built Greene King into a leading brewery, pubs and restaurant chain. He says he loves to compete. Rivals are less impressed.

The shy, retiring Rooney Anand is anything but. “Just going to have a jimmy. Then you will have my unbridled attention,” says the Greene King boss, placing two pints of IPA on our table before heading off to the gents. And there was I thinking that, because he never gives interviews and doesn’t mix easily with other brewers, he would be a hard man to pin down. How wrong can you be? To read more click here.