March 3rd 2022 marks the 25th anniversary of World Book Day in the UK, but why should schools have all the fun? Book-lovers rejoice, as we discover some impressive places to visit and raise a glass in.

On our main site, we have created a publist of the old stomping grounds of some of the world’s most famous authors, playwriters and poets, their favourites often mentioned in their work: www.useyourlocal.com/publist/literary-pubs-frequented-by-the-greats-1777.

Going as far back as Shakespeare, his regular London haunts and his last visited in Welford on Avon, where it is believed he contracted fatal pneumonia after stumbling home in the pouring rain!

We have listed those that were frequented by the likes of Charles Dickens, Oscar Wilde, Jane Austen, Beatrix Potter, George Orwell & C.S. Lewis to name a few. The Grapes, along with its deep history and famous patrons, can even count Sir Ian McKellen as one of its owners, well-known for bringing J.R.R.Tolkien’s Gandalf to life.

If you want to follow in the footsteps of classic characters, delve into a collection of adventurous bars inspired by Phileas Fogg. From his Mayfair residence to Aunt Gertrude’s Tavern & Gin Parlour, you can transport yourself back to the Victorian era, surrounded by artefacts and antiquities from Mr Fogg’s travels. The Society of Exploration is located only a stone’s throw away from Charing Cross station – the starting point of his famous voyage around the world!

However, the loyal local can also be an oasis in the everyday hustle and bustle, the perfect snug area to cosy up in and get lost in the pages. Already featured Coppa Club, are great for exactly this, a “home from home”, local hang-out, designed for eating, drinking, meeting and unwinding. So, let’s discover some more!

Whether you want to absorb a part of history, immerse yourself within their creations or just hunker down with your prized paperback, we have a pub just for you. Sign up today and follow your favourites: www.useyourlocal.com/join. 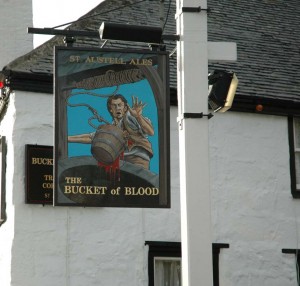 Wordsmith that I aspire to be, I savour the shipping forecast, delight in spelling my surname with the phonetic alphabet and take pleasure in ticking off exciting sounding stops on the London underground. Pubs intrigue me too – but not just for their promise of cosy booze. Behind the quirky often olde English names are yards of yarns…

Rather than text, many originally wore symbols as signs to lure within the thirsty illiterate. Unsurprisingly for a kingdom, ‘The Crown’ is among the UK’s most popular names, as is the expression of arable honesty, ‘The Plough’. And many innings of ‘Cricketers’ overlook village greens as picturesque and seemingly serene as a Midsomer Murders’ set. Considering we invented the locomotive, ‘The Railway’ is also much in evidence fringing silvery rails shivering with sweaty commuters.

In a more racy thread, Cornwall’s low beamed ‘Bucket of Blood’ allegedly recalls the murder by smugglers of a customs official whose spent corpse was hastily discarded down a well. When drawn by an unsuspecting landlord, the pail proved the colour of crimson.

Although ‘the greatest advantage in gambling lies in not playing at all’ (Gerolamo Cardano), gambling has long been fuelled by booze. Balls Pond Road in Islington may well have been named after an establishment run by one John Ball who charged customers to take a shot at fowl floating in a pond at the back of his pub.

Away from terra firma, Birmingham’s Man in the Moon was renamed The Man on the Moon on the day of the first moon landing (20 July, 1969). And rather than Leicester Square’s crowded Wetherspoon’s with wi-fi, George Orwell used his last Evening Standard column to issue a love letter to his fantasy of the ideal London watering hole.

‘The Moon Under Water’ should eschew ‘plastic panels masquerading as oak’ for ‘uncompromisingly Victorian’ fittings and architecture, while the hair of two middle-aged barmaids must be dyed ‘in quite surprising shades.’ And a near secret garden would unravel at the end of a narrow passage. He penned: ‘you find yourself in a fairly large garden with plane trees, under which there are little green tables with iron chairs…’

Incidentally, J.D. Wetherspoon’s 6’6″ mullet laden founder, Tim Randall Martin named his brand after a teacher at one of the eleven schools he attended, after reputedly being deemed a lost cause academically. “He was the least likely person to control a pub because he could not control a class,” said the literal publican giant to the Independent. Regardless of education speculation, from a micro pub in a former betting shop in the late 1970s, Martin’s vision now encompasses over 800 counters.

Other pubs are named after food, such as Southsea’s ‘Sir Loin of Beef’, physical support of the legend that a protein cut was rendered protagonist when knighted. And Manchester’s ‘Oxnoble’ recalls a variety of potato particularly popular in Georgian times.

The various instances of ‘Black Boy Inn’, from North Wales to Berkshire now receive complaints for obvious reasons despite probably being named after blacksmiths, while, finally on this brief dip into the cask of rumour and reality, which could evolve into a book, The Cock and Bull is a play on the cock and bull story. The story goes that intense rivalry between clienteles of both Cock and Bull pubs yards apart in Stony Stratford led to increasingly enormous exaggeration…